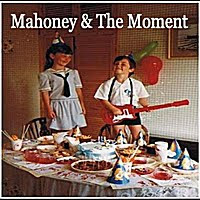 Mahoney & The Moment - S/T (Independent)
Mahoney & The Moment are Steve Mahoney and Emily Moment, and my goodness; they’ve got an ear for a tune. Inspired by fresh love, of each other and the cities they live in (New York and London), their take on folk pop is upbeat, buoyant and positively life affirming. I imagine long term exposure to their self-titled debut might actually be good for me, though, as with all alternatives to conventional health guidelines, no-one’s prepared to do the clinical trials. Shame.

Anyway, I digress. Steve and Emily have released themselves a record that exudes gentle optimism, like the first Crosby, Stills and Nash album, or Fleetwood Mac, before the bed hopping. Their vocals mesh beautifully, taking songs like “When She Smiles Back At Me” and “Roadtrip” to new levels, and individually they’re almost as good. Steve’s got a Paul Simon thing going on; check out “The Next Love” and Emily’s New York urbane twang is magnificent on “If You Only Asked Me To”.

It’s an album custom made for driving around in the summertime, with the windows down, sharing those good vibes with whoever’s lucky enough to be listening. Unfortunately, summer’s over, so they’ll be keeping me warm in the winter instead. Them, and a great big oil heater.
www.facebook.com/MahoneyandtheMoment
Simon M.
Posted by Bangs at 10/13/2011 11:16:00 am