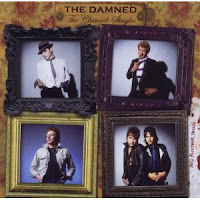 The Damned – The Chiswick Singles… And Another Thing (Ace)
The Damned were only signed to Chiswick Records for a couple of years, but it was a successful collaboration, resulting in two albums, the exceptional “Machine Gun Etiquette” and the ambitious but flawed punk-prog epic, “The Black Album”. The singles from the period, collected here (with extras) show a band more than willing to experiment, and a group of individuals all mixing different influences into the pot.

Kicking off with their Chiswick debut “Love Song”, who can forget the manic pop thrill of Algy Ward’s planet rumbling bass intro as first witnessed on Top Of The Pops (circa 1979), as Dave Vanian distorts and disfigures the traditional love song into something brilliantly perverse and intentionally hilarious. Typical line: “I’ll be the rubbish, you’ll be the bin”. “Smash It Up” (banned by the Beeb, of course) encouraged just that, “I Just Can’t Be Happy Today” and “The History Of The World (Pt 1)” indicated they were at their pop songwriting peak, and “There Ain’t No Sanity Clause” is simply the best punk Christmas song ever.

The b-sides throw up some long mislaid gems. “Noise Noise Noise” is fabulously rough ‘n’ ready, but instantly loveable. Their cover of The Sweet’s “Ballroom Blitz” unmistakably features Lemmy on bass and not forgetting the just plain brilliant “Rabid Over You”. Add to those many delights the CD debut of the complete “Friday The 13th” EP, and you’ve another fantastic and essential Damned release from Ace. Well-done chaps!
www.officialdamned.com
www.acerecords.co.uk
Rob F.
Posted by Bangs at 10/27/2011 02:37:00 pm