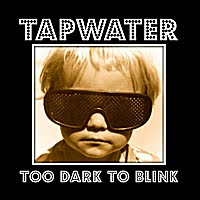 TapWater - Too Dark To Blink (Independent)
TapWater are a six-piece Americana group based in Portland, Oregon, slowly but surely building their reputation through a series of well received releases and a busy concert schedule. Such is their growing status, their latest album, “Too Dark To Blink” has attracted various high profile guest turns, including several members of Los Lobos. Indeed, Steve Berlin produces and plays saxophone and melotron. Not two instruments that are naturally associated with an Americana band, but when you consider that frontman Rudy Slizewski also contributes steel drums, xylophone, trombone and marimba, and other listed instruments include lap harp and flugelhorn, it’s probably best to chuck those stereotypical expectations out of the window.

Thanks to Berlin’s production (and the band’s experience) it’s somewhat remarkable that “Too Dark To Blink” doesn’t ever feel cluttered or clumsy. The sound is full and rounded, and the variety of instruments is beautifully judged. When the steel drum makes an appearance on “Drownin' Without Love” it’s a genuine moment of joy, and they repeat the trick on “See Ya Maria”, though it’s mixed gently with lead guitar. Tracks like “Frankie Leigh” and “Big Belly Blues” make comparisons with early Wilco and The Band fully justified and the short but very serious, almost classical, “With My Curtains Closed” indicates a band willing to take on anything, and able enough to prevail. Recommended.
www.tapwater.net
Rob F.
Posted by Bangs at 10/27/2011 02:24:00 pm