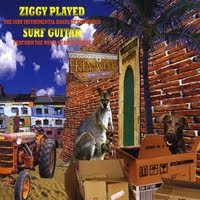 Various Artists – Ziggy Played Surf Guitar (Cordelia Records)
The album’s subtitle, “The Surf Instrumental Bands of the World Perform the Music of David Bowie” clearly states the projects simple concept and as such there are no real surprises. There are, however, a few numbers that deserve a mention.

The raucous and punny “Surfer Jet City” from The Pterodactyls.

The poptastic “All the Young Dudes” from The Glasgow Tiki Shakers.

The restraint of The Red Plant’s “Rebel Rebel”.

The Bowbridge Band’s almost epic (at 5:34 long) “Let’s Dance” is magnificent and is what John Williams playing surf guitar to a bossa nova backing track may sound like!

“The Laughing Gnome” purely because it fails to get a mention on the track listing!

If 22 tracks are not enough for you there’s additional downloads of “Starman” by The Pterodactyls and “Ashes to Ashes” by The Weasletones from the Cordelia Records website (link below).
www.cordeliarecords.co.uk
Willsk
Posted by Bangs at 10/08/2011 11:28:00 am