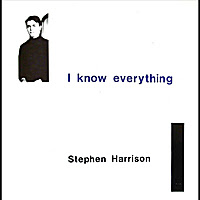 The first three tracks were co-produced by Paul Haig (Josef K) and Alan Rankine (The Associates) in 1985, while the second half was recorded a couple of years later with Ewan Burke behind the desk. Harrison’s style changed considerably over the period, with the earlier songs “Let Go”, “Pack On Your Back” and “Sad And Blue” very much rooted in the Velvet Underground / Television influenced Scottish post-punk of the early ‘80s. The latter three tracks, “Never Say Die”, “Winter Sun” and “Love Like This” are much brighter and upbeat, with a little more jangle in the guitars and a decidedly radio friendly pop edge. By that I mean John Peel would have loved it rather than Simon Bates.

For this 2011 reissue, a seventh track has been added. Recorded in 1994, “Glad It’s Over” shows a further change in style, and it’s probably the most accessible track here. It’s animated rhythm and confident vocal isn’t a million miles away from classic Prefab Sprout.
www.stephenharrisonmusic.com
Rob F.
Posted by Bangs at 10/13/2011 11:48:00 am