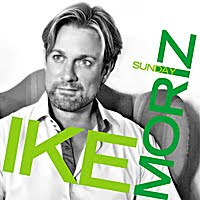 Ike Moriz – Sunday (Mosquito Records London)
It would be wonderfully neat and tidy to state that ‘Ike Moriz is South Africa’s answer to…’. Unfortunately, that’s too difficult a sentence to finish. I don’t think there’s another artist in the world that’s so adaptable to different styles and sounds in the way Moriz is. His “Breathing Dreams” album (also released this year) was a pop/rock album that touched on everything from indie pop to Bowie inspired glam. It could’ve (perhaps should’ve) been a mess, but it wasn’t, it was focused and inspired, and always entertaining. “Sunday” (just one of three albums released in 2011) is a completely different sort of record. Here he takes inspiration from the great easy-listening singers of the ‘50s, ‘60s and ‘70s, and for the most part, the Great American Songbook provides the material.

“Sunday” opens with a Broadway number, written back in 1940 by Nancy Hamilton and Morgan Lewis. “How High The Moon” has been famously covered by Les Paul and Mary Ford, Ella Fitzgerald and Sarah Vaughan, and there are countless instrumental versions on offer, but Moriz does the song credit, performing the words with a smile on his lips, and his band keep it upbeat, though instrumentally sparse. Piano is often the lead instrument, and Moriz plays it jazzy and light. It perfectly suits his voice. Other standout tracks on this 16-track collection include Johnny Mercer’s “Satin Doll” and the absolutely charming version of Cole Porter’s “What Is This Thing Called Love?”. Fans of contemporary jazz singers, as well as the old guard, would do well to keep an eye on Moriz. I, for one, am already looking forward to his next record.
www.ikemoriz.com
Rob F.
Posted by Bangs at 10/13/2011 11:06:00 am