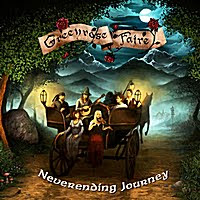 Greenrose Faire - Neverending Journey (Independent)
Greenrose Faire is a six-piece medieval folk-rock band from Finland. I imagine live they’re an absolute blast, and go down a storm at medieval fairs, and suchlike, but “Neverending Journey”, their debut long-player, is worthy of attention in its own right. Their jaunty playing, Tomi Hyttinen’s songs and Salla Rimmi’s classic folk vocals come together to form something that falls between Steeleye Span’s finer moments and the hugely enjoyable Circulus. The fact that their record sleeve brings to mind the minstrels in Ingmar Bergman’s “The Seventh Seal” just adds to the kudos.

Unusually for this sort of project, they neither pander to metal fans or proggers. Instead they stick to their own vision of five hundred year old song and dance music, with the latter desire to get an audience moving, an important factor. It’s rare that I come across so many instruments that I don’t know. These include a dadgad guitar, mandocello, Irish bouzouki and çifteli. If their desire was to worry my spellchecker, they’ve succeeded on several counts.

There are a number of tracks on “Neverending Journey” that I find myself returning to with some frequency. The opening call to arms of “Dance 'Til Morning Light” seems to function in the same way as Fairport’s “Come All Ye” on “Liege And Lief”. “Beggars And Thieves” has all the energy of The Levellers at their most strident (I am, of course referring to the crusty folk-rock band rather than the 17th century English radicals), and not forgetting “Witchdance”, another floorshaker, and not unlike All About Eve – but considerably more fun.
www.greenrosefaire.com
Rob F.