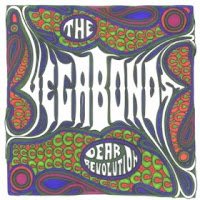 The Vegabonds - Dear Revolution (Independent)
This debut from Alabama’s six-piece Vegabonds reaches us a full twelve months after its local release, and is more a taster for sophomore album ‘Southern Sons’, due to appear in January. If it’s meant to stir interest in their corresponding European dates (none scheduled for the UK so far) then it works well.

Unmistakably a southern outfit they veer towards the softer, soulier side of the Black Crowes without any attendant loss of energy or substance. Strong vocals, tight rhythms and washes of slide make the album a surprisingly compulsive listen. Singer Daniel Allen provides the bulk of the impressively mature home-grown material with occasional contributions from guitarists Alex Cannon and Richard Forehand. Formed from the ashes of two earlier outfits as recently as February 2009 they have the hallmarks of a band we could hear much more from in future.
www.facebook.com/The-Vegabonds
Neil B.
Posted by Bangs at 10/26/2011 08:07:00 am