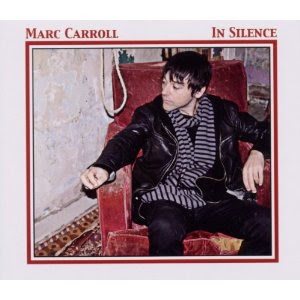 Marc Carroll - In Silence (One Little Indian)
Ah, Marc Carroll. I have created a significant gap in my CD shelving to house anything and everything that he does. If you’re not familiar with this chap's music you really should be. It’s in a class of its own, as he covers the widest of varieties within alternative pop music, and does it blissfully, from sublime acoustic strumming to glorious chamber pop. Marc Carroll is an incredible singer-songwriter, a masterful musician and producer; a great covers artist, a superb orchestrator and a true master of all things in the realm of popular music. As with his music, he himself moves around. Originally from Dublin, he has based himself in London, then again in Dublin, and currently resides in Los Angeles. Yet his music is never restless, always divine.

This latest album is a sojourn into previously charted territory, by which I don’t mean the pop chart, which he’s never troubled, nor been troubled by. Ten of the twelve tracks here are taken from his last two albums, “World On A Wire” (2006) and “Dust Of Rumour” from 2009. In addition you get a cover of "Matty Groves" (a 2010 single release) and "In Reverse", an instrumental track which has only featured on a Japanese CD release of 2002's “Ten Of Swords”. A bit of a strange mix, as it almost ignores his first two albums (“Ten Of Swords” and “All Wrongs Reversed'”. Perhaps he, or his record company, or both, decided to concentrate on his more recent work for a reason only known to themselves.

Well, it hardly matters. If you decide to give this a chance, you will surely be intoxicated by his music that you will hunt down everything else. Oh, and by the way, there’s a new album on the way, so you’ll need to allocate a space on your racks, too.
www.marccarroll.com
Kev A.
Posted by Bangs at 10/22/2011 02:25:00 pm