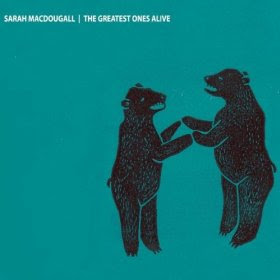 Sarah MacDougall - The Greatest Ones Alive (Rabbit Heart Music)
What a fine collection of songs Sarah MacDougall has bestowed upon us. How lucky can we get? Ten songs that come in at just under 40 minutes... almost perfect, though feel free to spoil us with a longer album next time, please. She was born in Sweden, but Canada is now in her heart, and her voice. MacDougall sings with warmth, depth, and an assurance that belies her origins completely. For all I know she landed in Canada as an infant, but the point is she landed, and this is about her and her homeland. If she’d stayed in Sweden we would have been graced with the same, but probably with a Scandinavian twist.

“The Greatest Ones Alive” is an alt. country album, with occasional folk inflections, which show in her vocal delivery, but especially in her writing. These songs are about her, her place and time in the world, what she feels, what she knows, what she’s still learning. From track one, "Sometimes You Lose, Sometimes You Win", she delivers her writing with a hush that curls your toes, and some of these lyrics will melt your heart: “Some people put their lives into a dream... I put my life inside a song... I believed like believers believe... In the song, in the song, in the song.” The title track gives us this from the off: “What did we used to say, the days we walked home in the rain... Down the tree-lined streets, past the corn and the grain... We were Vikings in the woods, we had ships in our eyes... We had the future planned out, it was so damned bright”.

She tips her hat to a couple of musicians in particular, Matt Rogers and Bob Hamilton, who helped her produce the album, and the latter, the mixing and mastering, too. Frankly, anyone who played on this album gets 5 stars from me. The playing is exemplary, and they complete the musical message that has been created here.

She herself creates an electric atmosphere by just breathing. I have listened carefully to "Mmm" to find this out. I am now listening carefully to the last track "We're All Gonna Blow Away", and this verifies my belief. These songs and the ones that mention Saskatchewan bedazzle me, and mountains standing steady, and being naked and stark underneath, and being blown away, which, of course, I am. I’m writing this on a Sunday. I am going to play this again; and again; and maybe again. I feel blessed. Go get a copy and get blessed yourself.
www.sarahmacdougall.com
Kev A.
Posted by Bangs at 10/08/2011 11:08:00 am