Review: The Ballad Of Mott The Hoople (DVD) 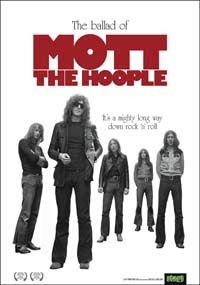 The Ballad of Mott the Hoople DVD (Start Productions)
Given the feverish rush for tickets and the subsequent critical acclaim that accompanied Mott’s triumphant five-night reunion at Hammersmith Apollo in October 2009 it is hard to imagine that for the thirty-five years previous the band had been all but forgotten. Not by everyone, its true; but considering the fire that burnt so intensely between the mainstream rise of ‘All the Young Dudes’ in 1972, and the premature finale signalled by the magnificent obituary ‘Saturday Gigs’ in 1974, it beggars belief that their legend should have been so subdued for so long.

The story has been told before of course, in Ian Hunter’s acclaimed ‘Diary of a Rock and Roll Star’ and the epic ‘Ballad of Mott’, probably the best song of its kind ever written; but Chris Hall and Mike Kerry’s film (with extra Hammersmith footage and DVD liner notes from long-time fan Morrissey) is a welcome addition which will both re-kindle old memories and hopefully consolidate the status of one of the ‘70s most inventive and passionate rock bands for posterity.

Enterprisingly assembled, archive footage interspersed with insightful interviews with band members and awe-struck admirers (Mick Jones, Roger Taylor, Kris Needs, etc.) is curated into a comprehensive account of the band’s Herefordshire roots, early development in the hands of Guy Stevens and Island records, and all-too-brief period of stardom, suits and platform boots. Band members themselves emerge as grounded, approachable and likable even on the cusp of commercial success; a fair reflection of the blue-colour earthiness of their sound, this was nonetheless a rare quality among early 1970’s rock luminaries and one to be rightly admired.

There’s no denying the frustration and disappointment still felt about the breakdown of the band’s relationship with Stevens, their failure to attract radio play, and the indignities of playing Switzerland’s toilet circuit; but as expected, Bowie emerges as saviour with his timely and generous gift of ‘Dudes’, heralding the purple patch Mott are best known for. Even hit records and a new home at EMI didn’t make life appreciably smoother however; and the extent to which Hunter’s emergence as band leader was as destabilising to the band’s cohesion as it was essential to their creative progression remains a contentious issue all these years on.

Interestingly it is late-period guitarist Ariel Bender (former Spooky Tooth member, Luther Grosvenor) who tells it most positively, even though he was eventually ditched for Mick Ronson and didn’t feature in the recent revival shows. In all it’s an engaging tale well told, the core strength being the openness with which interviewees engage with the project, supplying lively anecdotes and laying feelings bare. The all-too-few examples of concert footage, supplemented with action stills and recorded soundtrack, confirm Mott as both a pre-curser of the nascent punk scene and as musicians of enduring quality whose profile should at least equal that of any of their contemporaries.
www.startproductions.co.uk
Neil B.