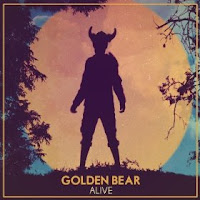 Golden Bear - Alive (C-Side Records)
Straight out of the blocks, the first track, "The Juggernaut", had me transported back in the late 1990s, as The Posies and Built To Spill came to mind, with The Flaming Lips making more than a guest appearance. The following "Promise Not To Tell" confirmed it, with the song cascading down around my ears, filling every corner of the room. A perfect example of no-nonsense, club-friendly indie rock. "The Ruin" has a superb piano opening, and once the sound has built up to a near crescendo, it all calms down, with the piano again to the fore, encouraging the vocals to aspire to greater heights. This is a true highlight, just about steering clear of the anthemic by making the arrangement a tad complicated, and not allowing a chorus to arrive and then be repeated.

However, this young band can’t quite deliver a full album of these delights. This, their second album, isn’t a complete success, and doesn’t fulfill the promise of those superb early tracks. After the very slightly prog "Who We Are" (well, maybe that's just me thinking aloud, as it has a rush about it that just cannot fit the prog tag at all - far too pacey) the music levels off, despite the ardent musicianship. Perhaps the songs aren't strong enough, or the musical ideas were found wanting. They almost redeem themselves with "Wait For The Signal", and actually do make it back to top form with the last track, "Not Tonight", which gives "The Ruin" a run for 'best song / tune' here, again with a piano centre stage, a superbly well thought out track.

This is definitely worth checking out, and I imagine their next might even be more on the money. Still, if I were you, I’d cash in now, and get there before the (possible) rush.
www.c-siderecords.com
Kev A.
Posted by Bangs at 10/26/2011 08:00:00 am