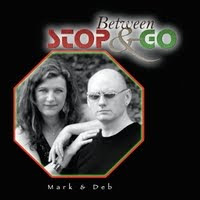 Mark & Deb - Between Stop & Go (Independent)
Mark and Deb Bond have been musical collaborators for nearly twenty years and a couple for well over a decade. The bands they’ve been involved with include Wildheart, The Larry Mitchell Band and Acid Bran, but now it’s just the two of them, and “Between Stop & Go” is their debut release.

What quickly becomes clear when listening to their record is they don’t sound like a duo. The production is smooth and fully realized, their blues style is commercial and radio-friendly, and it’s artists like Steve Winwood and Eric Clapton that come to mind. Mark is a terrific guitarist, delivering a series of perfectly weighted solos to augment a sound that Deb anchors with layered keys. They both sing, though Mark generally takes the lead.

If they sound grown-up, it’s because they are, though that doesn’t mean they’re not having fun, and their obvious passion for what they do (and each other) is evident throughout “Between Stop & Go”. Fans of the two artists mentioned above will find much here that they’ll connect with, but to whet the appetite try to track down and hear “Down To The Hollow”, it’s just about a perfect distillation of what they do. Failing that, “Don’t Let Me Go” features a great vocals and guitar by Mark, and the epic “Good Times” will undoubtedly turn heads.
www.markdebbond.com
Rob F.
Posted by Bangs at 10/29/2011 07:31:00 am