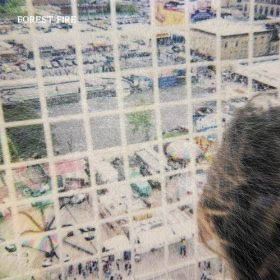 Forest Fire - Staring At The X (FatCat Records)
This music has such quirky depths you can’t see the bottom. All the songs are unhinged from each other, yet, as a whole, the album exhibits the stability and density of a really good chocolate brownie. This is thoroughly modern music, indie with a capital 'I', and for this genre (of late) it’s a refreshingly new sound.

The whole musical palette is represented here, with guitars going off at different times with different sounds, various synthesizers and keyboards creating minor cacophonies, percussion throbbing and bobbing away, all joining together within a song to create tunes that defy gravity. "Future Shadow' is a good example of this; I doubt anyone can ignore it once it pulls them in, and believe me, it has mighty pulling power. Following on immediately is "The News", which features a glorious saxophone interrupting the jerky, but accessible, musical procession not once, but twice. It appears triumphantly again at the end of "Mtns And Mtns", providing a raw and powerful conclusion.

The final track is an eight and a half minute off-kilter ballad, "Visions In Plastic", which sums up this splendid album for me. It has an almost naive power that blossoms and swoops around almost every note struck, every word sung. If they keep that power intact, that ability to create new musical creations, as their career progresses, they will be revered. I can't recommend this album enough.
www.myspace.com/fuckforestfire
Kev A.
Posted by Bangs at 10/14/2011 12:30:00 pm