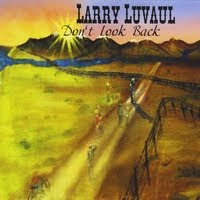 Larry Luvaul - Don’t Look Back (Independent)
Larry Luvaul lives in Washington State, but it’s no surprise to find out he was born, raised and lived in Texas. It’s a state that nurtures and cultivates singer-songwriters and listening to Luvaul’s debut record, it’s John Prine and Townes Van Zandt who come most readily to mind. That’s not bad company to keep, and Luvaul manages it by exposing human frailties and foibles, often his own, and singing his songs with a voice that always feel delicately poised on the brink of redemption.

His music, though predominantly acoustic, is rich and layered, with fiddle, harp and sound-effects adding to the simple guitar / voice setup. His lyrics are story based, though he’s comfortable being cryptic, whether it’s about relationships with people (or animals) or particular characters. He regularly uses a technique where he adds an unexpected syllable, pause or word to a line that can’t help but catch the ear.

“Don’t Look Back” hangs together as an album pretty well, though there are tracks that deserve a special mention. Lead number “Just Us Two” is charming and quite addictive, “Ballou’s Letter” brings a little Guy Clark into the mix, though it’s Townes that Luvaul might be channeling, and “The War In Not Over” is an eternal truth, related by a man who served his time in the US navy during the Vietnam conflict.
www.facebook.com/pages/Larry-Luvaul-Dont-Look-Back
Rob F.
Posted by Bangs at 10/13/2011 11:31:00 am