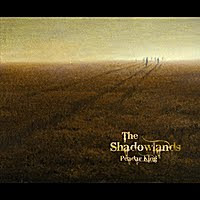 Peadar King - The Shadowlands (PKM)
Peadar King is a singer-songwriter from the Island of Inishbofin, an isle off the west coast of Connemara, Co. Galway (in Gaelic, Inishbofin means island of the white cow). Over the years the island has built itself a reputation for traditional Irish music, with artists like The Inishbofin Ceili Band and Dessie O'Halloran touring all over the world. Peadar King hasn’t made that sort of breakthrough yet, but then, neither is he a strict traditionalist. Listening to King’s sophomore record “The Shadowlands”, it’s artists like Jackie Leven, Richard Thompson and Van Morrison that comparison is most easily made.

Because of his location, it’s understandable that ships and the sea feature frequently in his songs. His imagery is both romanticized and candid as he can’t resists the beauty of his surroundings but neither does he deny the hardships of the men who earn their livings working the coast. His voice, rich and sincere, is the perfect instrument for his stories, and accompaniment is kept to the basics; guitar, a muted rhythm section and occasional piano. King’s songs are reliably poignant throughout, and it’s a record that grows in stature each time it’s heard. “Dark Days” with its wasted Americana arrangement is a particular favourite, as is “The Lights”, where a restrained piano tinkles and King’s voice takes centre stage.
www.peadarking.com
Rob F.
Posted by Bangs at 10/13/2011 11:54:00 am