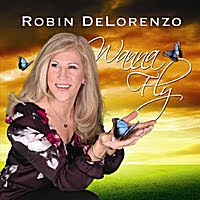 Robin DeLorenzo - Wanna Fly (East West Music Inc)
This is DeLorenzo’s latest CD “Wanna Fly” officially released in 2011. She brings to the table a plethora of musical experience that can’t be questioned. Her background: DeLorenzo hails from New Jersey area and is no stranger to the Music Business. She obviously knows what he’s doing behind the glass in a studio environment.

I always listen to the first piece very, very carefully. It’s what the artists has personally chosen to be the first piece of music to hit your ears. I have to say I was extremely impressed with the opening track "I’d change for you” an upbeat number which possessed my full, unadulterated attention. To be honest: I expected a sing songy pop rock record that was extremely predictable and compatible for a mass audience. What I discovered was quite the opposite. The whole CD is wonderfully simple yet full of what I would call positive energy, with music that appeals to all the senses. She reminds me a bit of Bette Midler. There are both fantastic and entertaining moments on “Wanna Fly” which gives the sound a very uplifting and marketable feel. There were some entertaining moments throughout, but also a few pin drop moments as well. From top to bottom “Wanna Fly” is an extremely polished sounding production with amazing sound quality, legendary musicianship and top of the line musical compositions. If I had to pick one word or phrase that best describes DeLorenzo it would be “Genuine Article.” She holds nothing back and is totally being herself.

The most amazing thing about Robin DeLorenzo is her X-Factor. What is X-Factor – it is the passion within and this is nothing that can be taught in a textbook. You either have it or you don’t. De Lrenzo appeals to both advanced and novice listeners alike. This is harder to do than it sounds – and shouldn’t be strived for, rather it should come just naturally. DeLorenzo has proven herself worthy of praise with her latest string of songs. There’s nothing more dangerous than a hot female artists armed with a voice, a song, and a one-way ticket to your heart.
www.robind.com
Adam Taylor