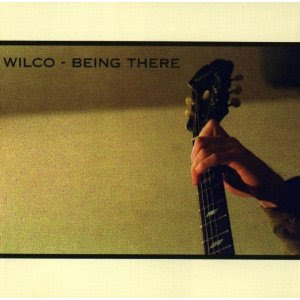 Wilco – Being There (Reprise)
Wow! Jeff Tweedy and the boys have made a very special, very ambitious album - a huge advance on their not-too-shoddy “A.M.” debut from two years ago. Without losing their country rock sensibilities they’ve produced a record comparable in parts to “Exile on Main Street” or “After the Goldrush”

“Being There” has so many great songs it’s difficult to know where to start, but the following must get a mention: “Misunderstood” seeps pain and longing before collapsing into the kind of sound-storm others base a complete career around, “Monday” has horns to die for, “I Got You (At the end of the Century)” rocks like it has no idea how to stop and “The Lonely 1” would grace any of the Big Star albums.

So what have we got? Maybe the best American release of the year so far, and a benchmark release for the rest of the genre. I can’t wait to see them again.
LB (1997)


Pigeonhed – The Full Sentence (Sub Pop)
Well, no-one ever said the man couldn’t sing. Shawn Smith has got as fine a pair of tonsils as any chap you’d care to mention. He can also write a song. Listen to the glorious “Buttercup” from the Brad album, or the title track from this latest offering from Pigeonhed, his collaboration with Steve Fisk.

Unfortunately the title track is by far the best thing on this eagerly awaited follow up to the duo’s 1993 debut. This album feels lazy - half-written songs and underdeveloped ideas that funk off to nowhere in particular. You won’t be playing “The Last Sentence” as much as their debut.
LB (1997)


Bill Janowitz – Lonesome Billy (Beggars Banquet)
Recorded over three days, Bill Janowitz of Buffalo Tom has produced the best work, so far, of his career. With rhythm section Joey Burns and John Convertino, the bassist and drummer with Giant Sand, “Lonesome Billy” explores that part of America frequented by saddle-bums and skeletal Longhorn, where tequila is drunk in dark bars and Sam Peckinpah offers the only meaningful direction.

Pedal steel, harmonica and piano weave in and out of these gritty country tunes leaving the taste of Arizona dust in the mouth and a sense of yearning tugging at the heartstrings. It would be nice to think that the rest of Buffalo Tom could be steered in the same direction.
LB (1997)


Eels – Beautiful Freak (Dreamworks)
Strange album this one, or so the man called E would have us believe. The singer, guitarist, main songwriter, indeed main man, tries desperately to come across as the freak if the title, all spoken word hokey wisdom and go-nowhere paranoia, but like the saucer eyed girl on the cover, you can’t help but feel slightly manipulated.

Don’t get me wrong, the album’s okay in a second-rate Beck sort of way. The opener “Novocaine For The Soul” sets the tone and it all ticks along quite nicely. “Susan’s House” is a particularly fine track but overall, it all feels a little strained.