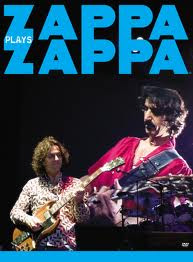 Dweezil Zappa and The Zappa Family Trust present...
The Music of Frank Zappa

Following the success of last year's Zappa plays Zappa concert as part of the Roundhouse's 70th birthday celebrations for Frank Zappa, Dweezil Zappa and The Zappa Family Trust are delighted to bring the show to the UK in November and December 2011 for a 13 date UK tour (dates below) ...

These spellbinding performances will see Zappa's eldest son Dweezil and his band 'Zappa Plays Zappa' performing the classic 1974 album 'Apostrophe' in sequence and in it's unmitigated entirety, as well as a host of other Zappa favourites; and in a final twist, the performance will also feature a section - from grave to stage - in which Frank himself will perform with the band via synchronized audio/video technology using unreleased video footage.

As Dweezil says,
"Not only will we be performing with Frank once again via the technological wonderment of enhanced video during the live performance, but we will also be performing the works from one of his most well known albums. That's right, 'Apostrophe', played in it's album running order. It's always been one of my favourites and it's certainly a fan favourite as well."
"My very first experience playing to a large audience took place in the UK. I played at the Hammersmith Odeon with my dad when I was 12 years old. All these years later I still feel a connection to the UK because it's part of a touchstone type of memory for me. One day I would love to come full circle and play at that venue again with my band. I know the venue now lives on under a different name but there's a parallel there. My father's music is also living on under a slightly different name, Dweezil Zappa Plays Zappa."
"I'm really looking forward to this upcoming tour especially on the heels of the Roundhouse Zappa festival. That was such a great experience. We'll be playing the entire Apostrophe album on tour and that really is a lot of fun. We'll have some other surprises in the set as well. We always strive to learn new material each time we tour and this time we're going to dig deep." DZ

The dates are as follows: