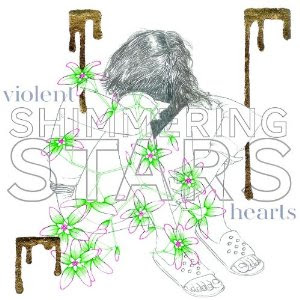 Shimmering Stars – Violent Hearts (Almost Musique)
Citing the Everly Brothers, Del Shannon, Phil Spector, Bo Diddley and The Beach Boys as influences, Shimmering Stars have clearly set their sights on emulating the sound, production and feel of the late 50s / early 60s: specifically the period between rock ‘n’ roll and the pop market dominated by the Beatles. Objective achieved… the reverb and tremolo heavy guitar riffs are there, the tales of love / lost love are there, the heartfelt harmonies are there and the surf sound is there (“East Van Girls” and “Into the Sea”).

A wall of sound production has been attempted, which sometimes makes things a little muddy, like it’s been mastered in a tin bucket where instruments and vocals meld together. Two options for enjoyment: turn the volume down low, or love their pseudo Jesus and Mary Chain sound!

Whether “Violent Hearts” serves as a purely fanatical pastiche remains to be seen. There’s little to place the recordings in the 21st century bar the few knowing modern lyrical twists, such as “Dancing to Music I Hate”. Inevitably, those that tend towards the past for their musical stimulation will enjoy “Violent Hearts”.
www.myspace.com/starsshimmer
Willsk
Posted by Bangs at 10/06/2011 04:47:00 pm