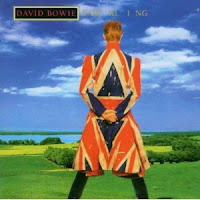 David Bowie – Earthling (RCA)
For a man who intends to float himself on the stock market this year, “Earthling” could be considered an incredibly reckless album to release. Guaranteed to alienate older fans that remember the classic ‘70s records, and the difficulties involved with a fifty year old attracting a new audience among younger listeners, Bowie could have been taking a huge chance with this eclectic mix of past and present.

Fortunately, “Earthling” mixes “Low” and “Heroes” era atmospherics with drum ‘n’ bass rhythms to produce the most startling album since 1980’s “Scary Monsters”. Hopefully we can forget all about the dreadful cack of the mid and late ‘80s, the “Tin Machines” and the “Tonights”, and instead let David Bowie take care of business.
LB (1997)


The Jayhawks – Sound Of Lies (American)
Hands up everyone who thought we’d seen and heard the last of The Jayhawks. With the departure of Mark Olson the general consensus was that they wouldn’t record again, but they’re back with what’s proving to be a fine album.

The first side is classic Jayhawks. Gary Louris is in great voice, and the harmonies with Karen Grotberg add a whole new dimension to the band. With one quality song after another, it’s good to hear them back again and on top form.

The piano led opener “The Man Who Loved Life” provides the perfect start, before “Think About It” and “Trouble” begin kicking in. The latter reminiscent of CSN’s “Our House”, though nowhere near as annoying. Other highpoints include “Big Star”, “Haywire” and “Dying On A Vine”

Some songs do miss Olson’s voice but “Sound Of Lies” is still a great record from a great American band.
LB (1997)


Engine 88 – Snowman (Caroline)
San Francisco’s Engine 88’s follow up to their critically acclaimed debut album “Clean Your Room” is an exciting slab of strictly off-centre power pop. Askew lyrics abound – the opener “Ballerina” and the single “Seconal” wander into the territory once held dear by the Pixies before they lost the plot, but Engine 88 are no copycats. Next single “Manclub” sees to that. It sounds like nothing else, a cross-dressing, anti-fridge song that’ll leave you with a smile on your face and your finger on the repeat button.

Production, courtesy of Tim O’Heir, is spot on throughout, and if the band isn’t careful they’re going to have a huge hit on their hands. A “Doolittle” for the ‘90s, perhaps?
LB (1997)


White Town – Women In Technology (Chrysalis)
You really wouldn’t wish the tag One Hit Wonder on anyone, but after listening to this album a couple of times, there’s really not too much here to inspire. Apart from the hit “Your Woman”, everything sounds remarkably dated in that horrible ‘80s way.

The sad thing is, you feel that the results could have been different had Chrysalis not rush released the album quite so quickly. A lot of the ideas seem to be sound; they just needed to be worked on a bit more thoroughly. Instead there’s a feeling of work in progress, of under-realised potential struggling to be heard. It almost sounds like a demo.

If Jyoti Mishra’s sound reminds me of anyone it’s the Magnetic Fields’ Stephin Merritt, though Merritt’s albums always sound fleshed out and complete. I hope the hit curse doesn’t spell the end of White Town. There is potential.
LB (1997)
Posted by Bangs at 10/29/2011 01:40:00 pm