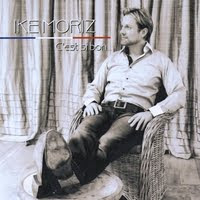 Ike Moriz - C’est Si Bon (Mosquito Records London)
“C’est Si Bon” is just one of three Ike Moriz album releases in 2011, and the first of two which explores the jazz vocal style of the 1950s, ‘60s and ‘70s. Moriz isn’t the only singer out there recreating the classic orchestral pop of Frank Sinatra, Dean Martin, Tony Bennett, et al, but I bet he’s the only one in South Africa. The fact that it’s just one string to a musical bow that takes in indie pop, London glam and triple-A rock makes these records all the more impressive.

On “C’est Si Bon” Moriz makes inroads into the French language tradition of easy listening and swing - think Charles Aznavour and Sacha Distel. The title track (music: Henri Betti, lyric: Andre Hornez) was originally made famous by Eartha Kitt, though it’s Dean Martin’s 1962 version than many will recognize. Here Moriz accompanies the song with little more than a jazzy piano, which allows his voice and phrasing to shine through - while the keys fill the gaps with some panache. Of the other three French language songs, Charles Trenet’s chanson classic “La Mer” is the standout, though there are plenty of fine performances to enjoy amongst the remaining 11 standards. His take on Robert Wells and Jack Segal’s “When Joanna Loved Me” adds a certain breezy lightness to the song, and the Henry Mancini / Johnny Mercer composition, “The Days Of Wine And Roses”, gets treated equally kindly with the barest of accompaniments.
www.ikemoriz.com
Rob F.
Posted by Bangs at 10/22/2011 04:41:00 pm