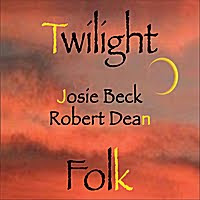 Josie Beck & Robert Dean - Twilight Folk (Independent)
Josie Beck and Robert Dean are a couple of acclaimed singer-songwriters and performers, and “Twilight Folk” is their debut as a duo. It’s a mix of country, folk and pop and fits neatly into the contemporary Americana genre, with its homey back porch style and easy way with a tune.

Beck earned her music spurs recording demo vocals, playing in bar bands and a stint as DJ on a country music station. Dean is an established New York-based singer-songwriter. Together they sing their songs, harmonizing to good effect and pick out a pair of interesting songs to cover. Neil Young’s “Harvest Moon” is a perfect ode to love, old and renewed – they almost pull it off. Springsteen’s “Thunder Road” get’s stripped back to its base elements, and Beck’s lead vocal is astounding. Dean’s voice is gravelly and fragile, but when they sing together, its flaws are wholly forgivable.

Of their own songs, highlights are the driving “Radio Days” and the twangy and utterly lovable “Aching For Always”. Check ‘em out if you can.
www.robertdeanwordsandmusic.com
Rob F.
Posted by Bangs at 10/27/2011 02:13:00 pm