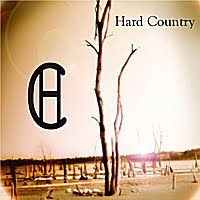 Hard Country - S/T (Independent)
From Murphy, Texas, Hard Country came together in 2004, founded by brothers Bryan and John Joyner. Their take on the country-rock tradition is rooted in fine songwriting and roots rock guitars, and they’re rough enough ‘round their edges to give the impression they’re happiest letting rip on a rowdy barroom stage. Which isn’t to say they struggle to replicate their enthusiasm and fervour under studio conditions. In fact, the opposite is true. Their debut is vital and raw, and a throwback to a time when Texas was renowned for country bands who knew the Stones and Faces as well as Merle and Hank, and a national scene which included Jason and the Scorchers, True Believers, The Blasters and The Long Ryders.

It’s a consistently good set. The songs are memorable and they nail their choruses. Greg Deans and Eric Tamblyn (guitar and bass, respectively) both supply harmonies on the vocals, and the band sound tight, though never slick. Needless to say, there are a few standout songs which deserve an extra mention: opening track “Better Life” could have been lifted straight from Zippo’s legendary “Acres For Cents” compilation, “Anymore” is classic country blues ‘n’ booze, and “Ain’t No Pat Green” laments their lack of guitar skills, but misses the point spectacularly. When they slow things down on “Forever In Your Arms”, they impress just as much.
www.hardcountryband.com
Rob F.
Posted by Bangs at 10/28/2011 03:32:00 pm