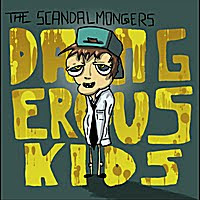 The Scandalmongers - Dangerous Kids (Independent)
There’s something intrinsically right about The Scandalmongers’ “Dangerous Kids” record. They’ve great songs, plenty of hook-crammed tunes and the decency to refrain from over-cooking their creations. Instead, raw talent replaces studio slick, and the band’s passion for their material shapes a sound that’s both urgent and very exciting.

I’ve noticed on various websites comparisons to Ben Kweller, Elvis Costello and The Hold Steady, and perhaps it’s the early recordings of the latter that they most resemble, though it’s nothing overt, more an ability to marry the thrills and spills of raggedy punk guitars with big melodic pop songs. It’s the sort of thing that when done right can result in mass public acceptance and workers at CD pressing plants enjoying abundant overtime.

If you’re on the lookout for a few gems to restock your iPod, then opening cut “Gasoline” with its choppy chords and John Doe-fronted X ambience deserves a place on all the most discerning playlists, as does the post-punk tilt-a-whirl they’ve named “Go”, and the exceptional title track; a killer chorus and wild, rhythmic guitars merge to outstanding effect. For those who crave the heady musical buzz that only an album purchase can satisfy, my recommendation is ‘jump right in, sharpish’.
www.myspace.com/scandalmongersmusic
Rob F.
Posted by Bangs at 10/27/2011 02:17:00 pm