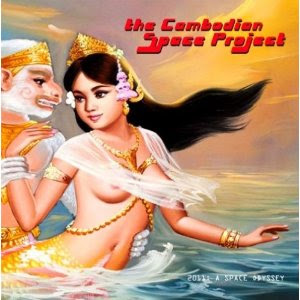 The Cambodian Space Project – 2011: A Space Odyssey (Metal Postcard)
The band name and album title suggest the CD’s contents should involve some sort of space rock with a far eastern ethnic twist. However, the band’s interest in space doesn’t appear to stretch beyond their chosen monikers.

The cross-cultural outfit was formed in Phnom Penh in 2009 by Australian Julien Poulson, and comprises Australian, French and Cambodian musicians. Lead singer, Srey Thy’s story is truly inspirational and cannot go without mention. She worked and supported her family from the age of 9, then at 18 was kidnapped and all but forced into a sex trafficking ring. Her narrow escape was down to an unknown woman cutting her from the bed she had been tied and giving her a small amount of cash to facilitate her flight. Srey was recently awarded the title of Good Will Ambassador for UN Women’s UNiTE for her work in promoting human rights in Cambodia.

The Cambodian Space Project pay homage to the Khmer rockers of the 1960s and ‘70s, with seven of the nine tracks being originally written or performed by three Cambodian musical legends: Ros Sereysothea, Sin Sisamouth and Pan Ron. Asian Rock ‘n’ Roll with accordion flourishes would best describe their sound, though I doubt comparisons to the similarly Cambodian fronted, Dengue Fever will ever be too far away (similar perhaps, but plagiarists they are not, as until recently the two groups didn’t know of each others existence).

“Kolos Srey Chaom / Love Gold” is the album’s purely postmodernist highlight where Ros Seyersothea’s words are sung over Shocking Blue’s “Venus” and the sole original, “Mean Visa Kmean Bai / Have Visa No Have Rice” is an excellent rocker and hopefully paves the way for their future.
www.myspace.com/thecambodianspaceproject
www.metalpostcard.com
Willsk
Posted by Bangs at 10/14/2011 10:52:00 am