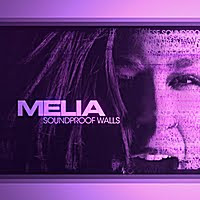 Melia - Soundproof Walls (Independent)
A musician for just four years, Melia Kimberly Maccarone has already made serious inroads into a promising career. “Soundproof Walls” is her debut long-player, recorded with her band (Dominic Ciaccia - drums, Tim Latus - bass, Rob Cerame - guitar), with Melia responsible for lead guitar, vocals and the songs. That’s quite a load for a 20-year old, but she seems completely unfazed, and her all-round performance is incredibly confident, leading her band through a collection of brash pop-punk and upbeat ska-rock.

The production on “Soundproof” is gloriously vibrant; the music almost leaps from the speakers. It’s absolutely appropriate, as there’s nothing lo-fi or half-hearted here. Melia’s songs are focused and vivacious, falling somewhere between the naïveté and pop thrill of early Blondie and No Doubt’s Jamaican infused bombast. Surely it can be no coincidence that “I Wanna Be Your Girl” brings out Melia’s inner Gwen Stefani. It remains a highlight of the seven-track set, though there’s no shortage of competition. “Checking Out” possesses a great vocal hook and serious guitars; “Sleaze Parade” is complex and technical, and thoroughly enjoyable. “Stay” indicates a talent for balladry, which might come in handy, should the mainstream come calling.
www.facebook.com/MeliaRocks
Rob F.