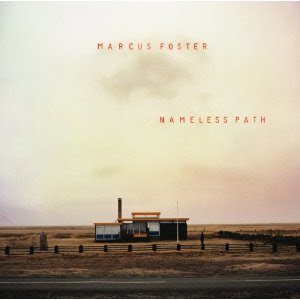 Marcus Foster - Nameless Path (Communion/Polydor Records)
This is Marcus Foster’s debut album, and it is obvious he’s worked pretty hard to get these twelve tracks sounding just the way he wants them. He has a voice that straddles styles almost effortlessly, and he has a 'catch' in his voice when he strains at the leash that always adds to the sound when it emerges ("You My Love", "I Don't Mind" are good examples, but you could almost pick any track).

Self-schooled on his father's collection of Dylan albums he may be, but we’re a long way from his doyen's territory. He mixes his tunes up, but his voice comes on strong on every track, and it’s definitely his voice, not a copy of anyone else. I can't compare it to another, actually, nor can I find a bag to tidy up this music that leaps out at you with a vivacious flare. Do you associate the word 'vivacious' with femininity? Okay, in a word, then, let me say his sound is full on soulrockfolkpassion (listen to "The Room" To really get his 'groove'), all rolled up in a tight instrumental bundle, with a brassy sheen to it.

Nope, Marcus Foster (an ordinary name for a quite extraordinary artist) does not hold back a thing. Ben Harper comes to mind fleetingly (but only fleetingly), as do the Kings Of Leon ("I Was Broken"), but that may be just the vocals with the latter; still, just from those references, you can see what a diverse set we have here. For a debut artist this guy can certainly go the distance right from the off. He has put together nearly an hour's worth of tunes, not one substandard, and more than a handful that will make you want to listen to them again... and again.

I read somewhere that “Nameless Path” should be compared to Van Morrison's “Astral Weeks”, but that’s somewhat fanciful, however this guy with an MA in Fine Art has sculpted here a really beautiful soundscape, and his direction has to be 'on the up', his destiny to succeed in his chosen field. “Nameless Path” will just lead you there, if you let it.
www.marcusfostermusic.co.uk
Kev A.
Posted by Bangs at 10/22/2011 02:41:00 pm