Review: Firekeeper – To Wake The Living 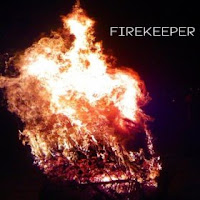 Firekeeper is a San Francisco folktronica duo, comprising of producer / guitarist / vocalist Becky White and drummer / designer Nathan Pundt. Both were core members of Becky White and the Secret Mission, a long running experimental Americana outfit, with a reputation for taking elements of other genres, like reggae and post-grunge / alternative, and integrating them into their west-coast folk-roots sound. If you get a chance, check out their 2007 album “Last Days Of Empire”.

The Firekeeper project provides an opportunity to try something different, where beats, field recordings, synths and guitars can come together. Recorded with a feel for the past – the instrumentation alternates between scratchy and old, post-punk and weird folk – and the effect is enhanced by White’s bruised vocals and their delicate, woozy melodies. The combination of digital and analogue sound contemporizes the collection, though it’s their songs that invariably take centre stage.

Beginning with “Great Unknown” - Pundt’s uncomplicated drum pattern maps out the track’s unswerving course, and White adds plenty of detail via her rich vocals and the song’s inherent catchiness. “Waiting for the Queen” is simply outstanding; it’s probably the best song on the album, and White’s enthusiasm for the drama, together with the lyrical twists and turns, is contagious. They end with the title track, a shimmering combination of trebly percussion and a wandering lyric – its six-minutes flies by.
www.firekeepermusic.com
www.facebook.com/firekeepermusic
www.firekeeper.bandcamp.com
Firekeeper CD Baby Page
Phil S.