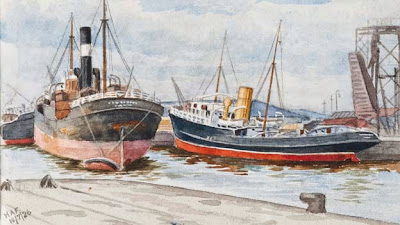 Hundreds of old drawings of ships which visited Scotland in the inter-war years are going on display at an Edinburgh museum.

An old suitcase containing 15 sketchbooks was handed in to Trinity House in Leith.

The drawings, in ink, pencil and watercolour, are the work of artist Hector French.

They can be viewed by the public as part of Doors Open Days taking place this weekend.

Little is known about the life of Hector French, a lithographer who lived near the Port of Leith, once one of the most important ports in Europe.

For decades he kept a detailed pictorial record of the ships which came and went.

He recorded the names of the merchant ships on his drawings, as well as the countries they came from.

Some of the ships were later sunk in WWII convoys, and the drawings show that French returned to them to add up-to-date details.

In one case he wrote "torpedoed" just two months after completing the sketch.

Hugh Morrison, collections registrar at Historic Scotland, said: "This is an incredibly exciting find. Not only are these drawings technically accomplished, but they provide a fascinating and unique record of the Port of Leith during an interesting period in its history.

"They offer us a detailed pictorial record of the ships which came and went between the wars and during WWII, when a photographic record would have been restricted.

"It is poignant that some of those ships were torpedoed not long after they were sketched in Leith by Hector French. He was clearly a very skilled artist, but since we have no other record of his work it appears that he simply sketched at the docks for his own interest."

Pauline McCloy, a national co-ordinator of Doors Open Days, said: "Whilst we nationally welcome lots of buildings and events to join our festival programme each year, little moments of happenstance like this bring the real meaning of Doors Open Days to life - the discovery of something new that may have been right under our noses all along.

"The discovery of a new part of history, of a new or unusual artefact, of a man sketching the changing world around him and saving them in a suitcase - it's like revealing a long-lost treasure that can tell us all a little bit more about the history of Scotland and the talent and skill of its people."