Mitchell and Webb set to return to BBC Radio 4 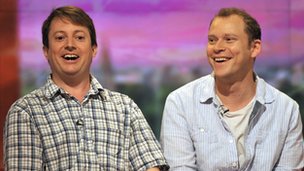 David Mitchell and Robert Webb are to return to Radio 4 for a fifth series of their sketch show in the autumn.

That Mitchell and Webb Sound was first broadcast in 2003 with the fourth series arriving in 2009.

The pair portrayed some of their radio characters in the Bafta-winning TV series That Mitchell and Webb Look.

Webb said: "I love doing radio, mainly because you don't have to do the actions. David does the actions anyway."

"I respect his process," he added, "although waiting for him to change costumes can be irksome."

The fifth series will see the pair collaborate with regular writers Mark Evans and Toby Davies, along with A Touch of Cloth writers Joel Morris and Jason Hazeley.

Their Peep Show colleague and Broadchurch actress Olivia Colman will also feature in the new series.

Radio 4 comedy commissioning editor Caroline Raphael said: "It's always wonderful to see Radio 4 programmes and talent move to television. My parting words to David and Robert were - 'the door is always open' and here they are."

Mitchell joked: "It's great to return to Radio 4 now that we're old enough to listen to it."

That Mitchell And Webb Sound will be broadcast on 6 November at 18.30 GMT.