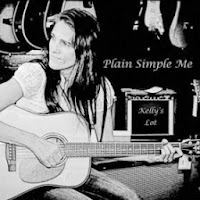 Based in Southern California, folk-blues-rock band Kelly’s Lot have released a number of albums and toured the US, Belgium, Germany, France and The Netherlands, and plan to visit Europe again this year. Formed by frontwoman Kelly Zirbes in 1995, the group is a flexible amalgamation of musicians, and a Kelly’s Lot show can be an eight-piece, full band experience or an intimate evening with Zirbes playing solo.

If my calculations are correct, “Plain Simple Me” is their eighth album, and it captures them in fine form. Strong songs are at the fore, and Zirbes voice is subtle, though never understated, and bright - she’s certainly no blues bawler. Indeed, her vocals are melodic and easy to fall for, and on opening cut “Soften Me Up” she’s the star of the show, controlling the song with just her voice and dominating the forcefully strummed acoustic guitar backing. “Restless” is just as good – it’s a powerful protest song with an epic, string-driven quality that’s irresistible.

The title-track is a perfect example of American folk music. Had it been released in the ‘60s or early ‘70s, Joan Baez would probably covered it, and when they choose to plug in and rock a little on “Runnin’”, they a hit a wicked groove almost instantly and the effect will surely put a smile on the face of the most cynical and jaded of blues-rock fans.
www.kellyslot.com
www.facebook.com/pages/Kellys-Lot
Kelly's Lot CD Baby Page
Phil S.