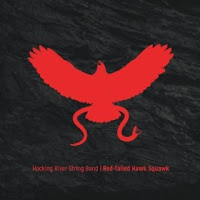 “Red-Tailed Hawk Squawk” is the Hocking River String Band’s second album, and continues their exploration of a genre that incorporates bluegrass, Appalachian folksong, traditional stringband music and our favourite catch-all, Americana. The group is based in Ohio, where they’ve earned themselves a fierce local reputation for vigorous live shows, and they’ve transferred much of that energy to their latest collection, which was recorded live in a converted Columbus schoolhouse.

All five members write, sing and play strings – guitar, bass, banjo, mandolin and dobro – and their mix of traditional and rock influences shape both their songwriting and their approach to their chosen genre(s). Although they’ve only been together as a group for a shade over two years, they play with an intuitiveness that’s breathtaking, and the brightness and vibrancy of their musicianship is a joy to hear. A trio of short instrumentals, “Bethea's Breakdown”, “Run, Arkansas, Run” and “Southern Flavor”, provides perfect showcases for speedy fingers and spontaneous musical interplay – and they’re fine folk tunes, too.