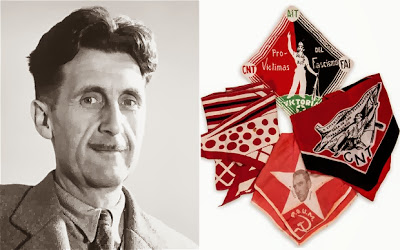 Scarves stained with the blood of 1984 author George Orwell, are to be auctioned in London.

Orwell was wearing the anti-fascist scarves when he was shot in the neck during a battle near Barcelona in the Spanish Civil War in May 1937.

He described the experience of being shot as "very interesting... roughly speaking it was the sensation of being at the centre of an explosion".

The scarves are expected fetch up to £1,200 when they are sold on 3 October.

Writing in his Homage to Catalonia, Orwell's personal account of the war, he said he had been "about 10 days at the front when it happened".

He continued: "Webb, our stretcher-bearer, had brought a bandage and one of the little bottles of alcohol they gave us for field-dressings. The doctor re-bandaged the wound, gave me a shot of morphine, and sent me off."

The scarves were saved by Hugh Patrick O'Hare, who treated Orwell in the aftermath of the shooting and was a fellow member of the Independent Labour Party (ILP).

He, in turn, passed them on to another member of the ILP.

Orwell's experiences fighting fascists would shape his work, including the allegorical Animal Farm and the nightmarish vision of totalitarianism in 1984.

Max Hasler, of auctioneers Bloomsbury, said that Orwellian memorabilia was rare but "to have something that relates to such a significant part of his life is especially unusual".

"I think it is a really interesting item. George Orwell was such a private person, very few examples of his signatures and photographs exist."

Although Orwell survived the neck wound, it ultimately contributed to his early death, at the age of 46, in 1950.