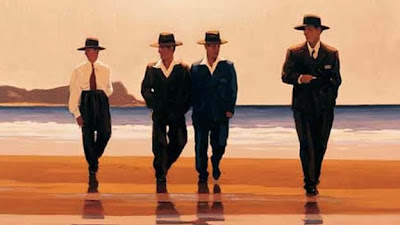 A major exhibition of paintings by Jack Vettriano, spanning his 20-year painting career, is to open at Kelvingrove Art Gallery in Glasgow.

The artist's biggest ever retrospective includes all of his most famous works such as Dance me to the end of Love, The Billy Boys and The Singing Butler.

Vettriano said it was thrilling to see his artistic journey from his early work, which he claimed was "limited".

The exhibition starts on Saturday and runs until 23 February 2014.

However, his traditional narrative style of painting has been strongly criticised by many in the art world.
Vettriano is unapologetic for the way he paints.

Describing how The Billy Boys was inspired by a poster of Quentin Tarantino's film Reservoir Dogs, he said: "I think it was Picasso who said some artists borrow, I steal."

Vettriano said he never expected to be asked to stage a major retrospective at a public art gallery during his lifetime.

"It will be quite emotional for me," he said.

He added that the majority of critics had not come round to his work.

"I can't put words into critics mouths," he said.

"I often get drawn into this kind of debate and I try to avoid it as there is nothing I can say.

"You have to ask them what their problem is with it."

All the paintings featured will be on loan from private collections and many are going on public display for the first time in close to 20 years.

Tickets cost £5 and £3 for a concession.