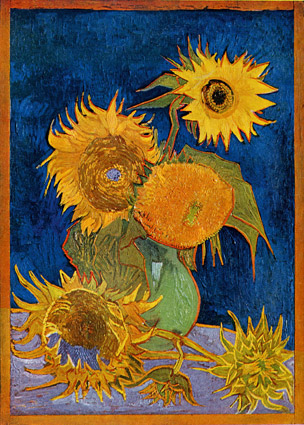 A rare photograph of a lost Sunflowers painting by Vincent Van Gogh has been found, showing for the first time how the artist wanted his work to be seen.

Van Gogh painted Six Sunflowers in 1888 but it was destroyed in Japan in 1945.

A photo of the painting has been uncovered in the archives of a Japanese museum, showing that the artist wanted it to be exhibited in an orange frame.

"He saw this orange frame as an integral piece of the artwork," Van Gogh specialist Martin Bailey said.

The painting, also known as Vase with Five Sunflowers, shows the flowers in a vase against a dark blue background.

It was sold to a Japanese collector and shipped to Japan in 1920. But it was destroyed in a fire after US bombing of Osaka during World War II.

Martin Bailey, a curator and correspondent for The Art Newspaper, discovered the photograph while researching his book The Sunflowers are Mine: The Story of Van Gogh's Masterpiece.

"I went back to Van Gogh's letters and he described when he was painting the sunflowers how he was going to put them in an orange frame. That has never been seen before," he said.

"Van Gogh loved complementary colours, like blue and orange together. He was really creating a total work of art, framing his picture.

"It was a revolutionary idea at the time, framing a painting in orange. Conventionally, paintings were framed in gilt frames, and modern paintings were sometimes framed in plain white frames.

"It showed what imagination and flair he had in doing something that was rather bold and would have actually appeared shocking. He wasn't frightened of that. He was really using his imagination."

Another of Van Gogh's Sunflowers series sold for £25m in 1987, smashing the record for the world's most expensive painting at the time.