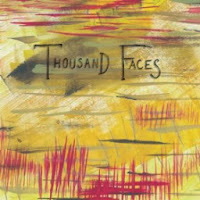 Led by singer-songwriter-guitarist-bassist-producer Evan McCulloch, New York City’s Thousand Faces play a hybrid form of folk-rock, which incorporates various contemporary sounds and styles. With a core membership of three – McCulloch together with Ryan Stokes (vocals, guitar) and Brian Adler (drums, percussion) – Thousand Faces are joined on the recording by several guest musicians, who add trumpet, saxophone and backing vocals. As a result, the music they make is complex and multi-layered, and suits repeated listening.

McCulloch’s a writer with plenty to say and with the perfect voice to say it. His rich, emotionally open tones give added resonance to his songs and the musicians around him provide plenty of space for his words to come to life - and those words invariably take centre stage.

The album begins with the faultless “Luminous” – its almost dreamlike narrative takes the listener on a journey that Jim Jarmusch should look into filming. I’d pay to watch it. Stokes plays some fine guitar throughout the track, infusing a Spanish flavour, which was unexpected but works incredibly well. “You Shine” wanders into Coldplay territory, but McCulloch ups the soul quota, and its stripped back instrumentation keeps the song grounded. “Open Door” taps straight into the new folk-rock sound, and fans of Fleet Foxes and the Mumfords should check it out, pronto. Indeed, it soars in a most satisfying manner, and the combination of vocals and guitar is almost magical.
www.thousandfacesband.com
www.evan-mcculloch.com/thousand-faces
Thousand Faces CD Baby Page
Phil S.