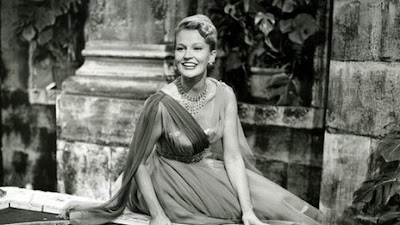 British singer Joan Regan, who had chart success in the late 50s and early 60s, has died in London at the age of 85.

She had a number of hit records, including Ricochet, May You Always and If I Give My Heart to You.

Regan also had her own BBC television series, Be My Guest, for several years.

The singer starred on both sides of the Atlantic with artists such as Perry Como, Max Bygraves and Cliff Richard.

Regan, who was born in 1928 in Romford in Essex, was one of the most popular British singers of her era and appeared regularly on radio and TV.

Her career took off after theatrical impresario Bernard Delfont heard her recordings and signed her up with his agency.

Regan soon won a recording contract with the British record label, Decca Records, although only for a trial period of three records, which by her own admission "didn't exactly set the hit parade alight".

However, Decca released a recording she had made some months earlier of a song called Ricochet.

The record paved the way for theatre, radio and television engagements.

Regan was later to feature on American television with major performers including Eddie Fisher, Tennessee Ernie Ford and Perry Como.

She appeared at the London Palladium many times, with other entertainers such as Max Bygraves, Cliff Richard, Russ Conway and Edmund Hockridge.

In 1984, she hit her head in the shower causing a blood clot on the brain which left her paralysed and without speech.

But after therapy she made a complete recovery, singing again in Britain on radio and in concerts.