'Rusting' 9/11 sculpture to be installed in Olympic Park 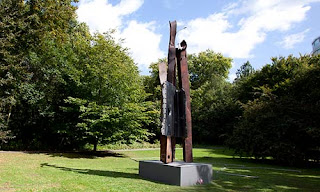 A sculpture made from a reclaimed World Trade Center girder that was left to rust in a Cambridgeshire farmyard will now be installed in the Olympic Park.

The sculpture honours the nearly 3,000 people, including 67 Britons, killed in the 9/11 attacks on the United States.

It was installed in Battersea Park but removed after one month, with attempts to install it elsewhere failing.

Following reports it had been left to rust, London mayor Boris Johnson said it would be found a permanent home.

One of the supporters of the project, Lord West, confirmed the sculpture had been left in an unnamed Cambridgeshire farmyard since it was removed from Battersea.

He said the girders were "sacred objects" in the US and only six pieces had been sent around the world.

"I think [the Americans] will be pretty shocked," he said.

"It's pretty pathetic, I think, that no one in this great city of ours has been willing to say we want it to have it here."

Lord West blamed bureaucratic "back-biting" for the failure to find a permanent home for the sculpture in London after it was initially unveiled in September 2011 - 10 years on from the attacks.

Mr Johnson said it had proved "incredibly difficult" with opposition from "boroughs and bureaucrats".

He said: "Clearly this can't continue. As a result I've asked my team to find a permanent home for the sculpture on the Olympic Park.

"The park was home to a Games based on tolerance, harmony and respect, and will soon be home to a massive multi-dimensional and vibrant community - the perfect riposte to those who sought to divide the world on 9/11."

The sculpture, titled "After 9/11", was created by US artist Miya Ando.