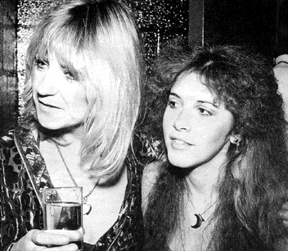 Singer Christine McVie is to rejoin Fleetwood Mac at two shows on their forthcoming European tour, her former bandmate Stevie Nicks has confirmed.

McVie was part of the group from the 1970s to the '90s, writing and performing some of their biggest hits.

Nicks told BBC Radio 4's Woman's Hour that McVie, who left the group in 1998, would perform one song at two concerts.

The tour begins with two shows in Dublin on Friday 20 September followed by a further three in London.

Nicks told Woman's Hour: "She is going to come and do a song on the second two shows. I think it will probably be Don't Stop. I don't know, but she's coming to Ireland to rehearse with us."

Nicks did not clarify which two shows she was referring to. A spokesman for the group said he could not confirm the details.

Don't Stop was McVie's biggest US hit as a songwriter, reaching number three in 1977.

The news comes despite comments from Nicks last December, saying of a possible return by McVie: "There's no more a chance of that happening than an asteroid hitting the Earth."

Nicks, however, went on to explain that her British former bandmate "doesn't want to fly" and "doesn't want to come back to America", which may explain why she has agreed to appear at a couple of UK shows but not their US dates earlier this year.

With the recruitment of Nicks and her boyfriend Lindsey Buckingham in 1975, the group morphed from British blues rockers to freewheeling California-based pop heavyweights.

They were also known for their tangled internal relationships. The McVies divorced in 1976 and Nicks and Buckingham split up shortly afterwards. Their romantic tensions inspired the album Rumours, which has sold 19 million copies in the US.

During the Woman's Hour interview, to be broadcast at 10:00 BST (09:00 GMT) on Monday, Nicks told presenter Jane Garvey: "Both of us in a man's world, from the very beginning, we made a pact that we would be a force of nature together. And we were.

"We had a lot of power when there were two of us. That wasn't really so noticeable to us because we just had it until she left.

"And then when she left I realised how much power we had when she was there, and how when she left she took 50% of the power with her… I felt powerless in many ways."