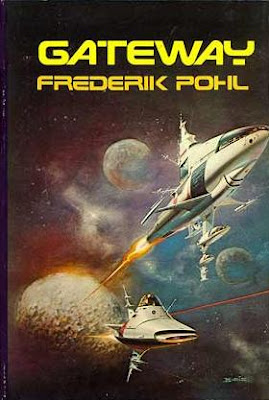 US science fiction writer Frederik Pohl - best known for his classic 1977 award-winning novel, Gateway - has died in Chicago at the age of 93.

Pohl wrote hundreds of stories, using his own name, and many pen-names.

A literary agent and an editor before his writing career took off, his first work was published in 1937. His last novel came out two years ago.

News of his death was first announced by his granddaughter, Emily Pohl-Weary, who is also a writer, in a message on Twitter.

"Rest in peace to my beloved grandfather Frederik Pohl, who showed me by example how to be an author," she said.

New York City-born Pohl wrote more than 40 novels and was best known for The Space Merchants, written in the early 1950s with Cyril M. Kornbluth and Gateway, which won the Hugo Award for science fiction writing.

In 1960, the British author Sir Kingsley Amis called him the most consistently able writer of modern science fiction.

Paying tribute to Pohl on his website, British author Neil Gaiman called him "the last of the Golden Age greats, the first generation of Science Fiction Writers who created the genre".

In an obituary released by the family, Pohl's editor James Frankel said: "It is difficult to sum up the significance of Frederik Pohl to the science fiction field in few words.

"He was instrumental to the flowering of the field in the mid-to-late 20th century, and it is hard to dispute that the field would be much the poorer without his talent and remarkable body of work as a magazine and book editor, a collaborator and a solo author."

Born in 1919, Pohl had a long-held ambition to be a professional writer and friends described him as an avid reader of the works of Tolstoy and science fiction magazines.

Having dropped out of high school, Pohl served in the US Army during World War II as a weatherman in Italy. He wrote advertising copy for a mail order publisher following his discharge.

Following the sale of the poem, Elegy to a Dead Satellite: Luna, to Amazing Stories magazine in 1937, Pohl went on to edit Astonishing Stories, Super Science Stories, Galaxy and If magazines, as well as an original anthology series, Star Science Fiction.

As a book editor, he worked on Samuel R Delaney's Dhalgren and Joanna Russ's The Female Man.

He is also credited with launching the careers of James Blish and Larry Niven.

Although he devoted much of his time to writing in the 1970s, he also was science fiction editor at Bantam Books.

In 2009, Pohl launched The Way the Future Blogs, in which he wrote about his life and the science-fiction community and championed progressive politics.

His latest novel, All the Lives He Led, was released in April, 2011.

Pohl, who was married five times, is survived by Elizabeth, his wife of 29 years, a son, three daughters and several grandchildren and great-grandchildren.

Ms Hull said his remains will be cremated and a memorial service will be held at a future date.