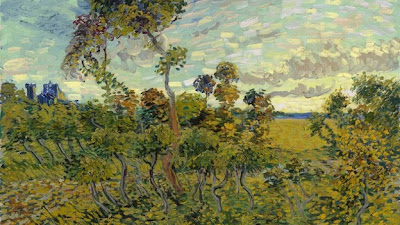 A previously unknown landscape painting by Vincent van Gogh has been identified by the Van Gogh Museum in Amsterdam.

Sunset at Montmajour - which depicts trees, bushes and sky - had spent years in a Norwegian private collector's attic after he had been told the work was not by the Dutch master.

The museum said the painting was authenticated by letters, style and the physical materials used.
It is the first full-size canvas by Van Gogh discovered since 1928.

He said the institution had previously rejected the painting's authenticity in the 1990s partly because it was not signed.

However thanks to new research techniques and a two-year investigation, it concluded the artwork was by the artist.

Researcher Teio Meedendorp said he and other researchers "found answers to all the key questions, which is remarkable for a painting that has been lost for more than 100 years".

The piece can be dated to the exact day it was painted because the artist described it in a letter to his brother, Theo, saying he had painted it the previous day - on 4 July 1888.

He added he painted it "on a stony heath where small twisted oaks grow".

The details in the letter had previously been attributed to another of Van Gogh's works - entitled The Rocks - despite that work missing some of the elements he describes.

But researchers have now identified the location Sunset at Montmajour depicts as being near Montmajour hill, near Arles in France, where the artist was living at the time.

Writing in The Burlington Magazine, Meedendorp said almost all the pigments used in the artwork were ones he "habitually had on his palette at this time", including a cobalt blue he began using from the summer of 1887 onwards.

The painting was also listed among Theo van Gogh's collection as number 180 - and that number can still be seen on the back of the canvas.

After the work was sold in 1901, it apparently vanished until it re-appeared in the estate of Norwegian industrialist Christian Nicolai Mustad upon his death in 1970.

According to Mustad's family, the French ambassador to Sweden visited the collector soon after he bought the painting and suggested it was fake or had been wrongly attributed.

Consequently, Mustad banished the piece to the attic.

After his death, the collector's family contacted the Van Gogh museum in 1991 to verify its authenticity, but it was eventually decided it was not by the artist.

The painting will be on display at the museum from 24 September.