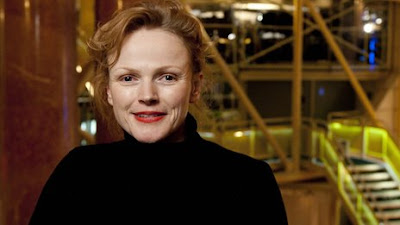 Actress Maxine Peake is to play Hamlet in a "radical re-imagining" of the play at Manchester's Royal Exchange theatre.

Peake began her career in the venue's youth theatre before going on to star in such TV shows as Shameless and Silk.

"I am so excited [about] how gender swapping can affect and throw up new ways of looking at this theatrical masterpiece," she said.

The play will open next autumn and will mark the start of her wider role as an associate artist at the theatre.

Hamlet will see Peake reunited with Royal Exchange artistic director Sarah Frankcom, who recently directed the actress in The Masque of Anarchy for the Manchester International Festival.

"Sarah and I have looked for a project that would stretch and excite us and Hamlet just seemed the the next natural step to challenge us both in so many ways," the Salford-based actress said.

Peake will follow in the footsteps of actresses from Sarah Bernhardt to Frances de la Tour, who have played Hamlet on stage in the past.

She added that the chance to join the Royal Exchange as an associate artist was "the cherry on the cake".

"I am so honoured to be part of this building's future for a little while, especially in this climate of savage cuts when more than ever we need to support our wonderful regional theatres," Peake said.

"I feel no need to compete with London - more than ever local people need a voice and a creative outlet in these extreme times and I feel the Exchange has a huge role to play in that."

Sarah Frankcom said: "I am certain Maxine will be a compelling and extraordinary Hamlet for our time."

The Royal Exchange said Peake would also get involved in the theatre's work with community groups and young people across Manchester.