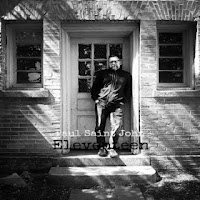 Born and raised in Scotland (he was a founding member of the UK folk-rock group, The Cottonfield), though now based in Philadelphia, PA, Paul Saint John has earned himself an enviable reputation as a vibrant live performer, and plays frequently in and around his new hometown. Also, with an award winning song and a new debut album under his belt, and festival and music conference appearances already booked, 2013 promises to be an interesting year for the singer-songwriter.

His sound remains rooted in folk-rock, and he seamlessly mixes his UK and US influences, a list which includes Dylan, Waits, Mumford and Sons and The Lumineers. He sings his songs with a distinct, full voice that’s wholly his own, and when he applies it to the opening track “All the Kings Horses”, it combines powerfully with a lyrically rich song, which doesn’t skimp on hooks. No wonder he’s making inroads into radio.

Indeed, it’s an album with no shortage of pop flourishes. “Raining Cats and Dogs” finds its groove somewhere between Dylan and John Prine, and is propelled with a forcefully strummed acoustic guitar and a bright harmonica adds detail. “Pillars of Hercules” shows a gentler side, and its ‘60s coffee-house ambience brings to mind Fred Neil and Buckley Sr. The album ends with “I'm Dr Jekyll, Mr Hyde” – its rolling structure is incredibly appealing, and lodges itself firmly in the part of the brain that appreciates that sort of thing.
www.paulsaintjohn.com
www.facebook.com/paulsaintjohnsongs2012
www.reverbnation.com/paulsaintjohn
Paul Saint John CD Baby Page
Phil S.

Learn how to place music on itunes at ReverbNation.com