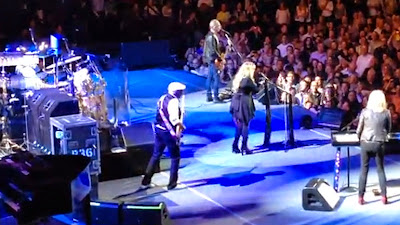 Singer Christine McVie rejoined her Fleetwood Mac bandmates on stage for the first time in 15 years at London's O2 arena.

She came out on stage for a rendition of the band's hit Don't Stop, a song she wrote for the band in 1977.

Fleetwood Mac's Stevie Nicks had earlier promised McVie would join the band for two UK dates, although she could not confirm which concerts.

There was an enthusiastic reception from the crowd when she was introduced to the stage at the O2.

Anthony Rosner, who was in the audience and filmed McVie's appearance, said: "There had been rumours she was going to appear on stage but after she didn't appear the night before, I think everyone had brushed off the idea, and then as soon as everyone saw her on stage, everyone was off their seats and filled with excitement."

Founding Fleetwood Mac member Peter Green - who left the group in 1970 - was also in the crowd for the concert, receiving a dedication for the song Landslide from Nicks.

McVie, born Christine Perfect, married Fleetwood Mac bassist John McVie and joined the group in 1971, moving from the UK to the US.

The couple divorced in 1976 but both remained in the band, producing some of their biggest critical and commercial successes, including the album Rumours, which sold 19 million copies in the US.

She left the band in 1998, returning to the UK and largely keeping out of the limelight.

Following the announcement of the current Fleetwood Mac world tour, Nicks said McVie did not want to fly to America so there was little chance of her rejoining the band.

But she later told BBC Radio 4's Woman's Hour that McVie would join them on stage at a couple of UK gigs.