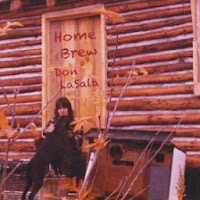 Don LaSala… where do I start… He’s a singer-songwriter, lead guitarist in the Hooligan Band jam band, respected sound engineer, and with his wife Susan, he’s the current owner / resident / steward / guardian of Big Pink. Yep, that Big Pink, the legendary house up in Woodstock, NY, where The Band composed the majority of their debut album “Music From The Big Pink”, and Dylan and The Band recorded a chunk of “The Basement Tapes”.

All those good Americana vibes have obviously rubbed off on LaSala, as “Home Brew” is an eleven-track collection that’s warm, welcoming, and easy to live with. It’s also a true solo record – LaSala has written every note and word, plays most of the instruments (Bill Klock plays drums on a few tracks and Sonam Lhasa sings back-up on one) and he’s recorded and produced the recordings in the Big Pink basement.

With a voice that resembles Ric Ocasek’s, though more weathered and windswept, LaSala sings his songs, which often refer to his life in and around the Catskills and Adirondacks, and the emotional ties that pin down most men’s lives. Universal truths, for the most part, but LaSala a talented writer, with no shortage of interesting viewpoints, and he wraps them up in solid melodies, and doesn’t forget to pack the hooks.

He’s also a fine guitarist, and the songs on “Home Brew” resound with his strings – both acoustic and electric. Standout tracks can be found throughout; “Sparkling Dome” is a delightful paean to the night sky, the title track a rustic bootlegger’s anthem and “What's Wrong With Me” rocks with barroom abandon. “Railman (Wide Eyed)” is a Hooligan Band favourite, and here it’s recorded with a laidback Stonesy swagger, and “28 Degrees in Saugerties” is radio-friendly American folk-rock.
www.bigpinkbasement.com
www.donlasala.bandcamp.com
Don LaSala CD Baby Page
Phil S.