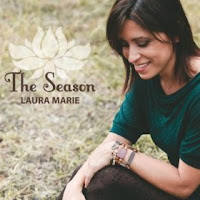 Laura Marie’s latest album, “The Season” is a “reflection on unconditional love” – always the most dangerous kind – and throughout the 13 tracks she bares her soul and shares her deepest thoughts. That kind of frankness may not appeal to everyone, but her skill with shaping melody whilst simultaneously attaching an amenable pop sensibility to her folk-rock songs, makes for an incredibly easy collection to enjoy.

A native of South Texas, she earned her performance spurs gigging around her home state with various bands, before a solo career beckoned. Over a relatively short period of time, she’s either won or been nominated for a series of awards, culminating in 2011 when she was named “Artist Of The Year” by the Texas Music Coalition, Obviously not one to rest on her laurels, Laura Marie has pushed on forward, refining her talents, and “The Season” provides an ideal opportunity to check out her progression as an artist.

The album begins with the outstanding “Perfectly Clear”. Laura Marie’s words are beautifully emphasized by a gentle electric guitar, and the water-based metaphorical devices – rain, sea and tides – are perfectly in tune with the production, here handled by long-term friend and musical collaborator Jake Owen. “Everyone Gets Lonely” uses much the same liquid imagery, and it’s perfectly realized, with crashing waves and raging seas taking on emotional form. It becomes a recurring theme, though used in many different ways. Perhaps my favourite track of an impressive bunch is “Hard Rain”, and although it shares a title with a Dylan classic, its roots seem firmly fixed in the UK folk rock tradition.
www.lauramariemusic.com
www.facebook.com/lauramariemusic
www.lauramarie.bandcamp.com
Laura Marie Songkick Page
Laura Marie CD Baby Page
Phil S.