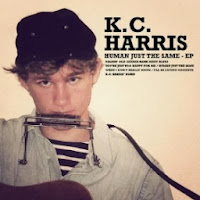 Back in the late ‘60s and early ‘70s there was a concerted effort amongst labels and the music press to find the ‘new Dylan’, and a host of songwriters were soon identified as prime candidates, from John Prine and Steve Goodman, to Bruce Springsteen and Loudon Wainwright III. Had K.C. Harris been around back then, the search would have come to an abrupt halt. His new EP’s artwork offers an instant clue to Harris’ influences; the hat, the harmonica (in its holder, of course) and even the font all scream Dylan circa “The Times They Are A-Changin”, and all suspicions are confirmed as soon as we hit the play button. His voice, songs, music, everything, is steeped in the classic early Dylan sound, a style that reinvented American folk music, and would eventually go on to completely change the face of pop and rock.

It’s unlikely that “Human Just The Same” will make the same impact, but taken for what it is, a collection of songs by a young singer-songwriter, we can only judge Harris by the quality of his material - and his words in particular. There he doesn’t fall short. All six tracks are clever and witty, and titles such as “Talkin' Old Geezer Bank Heist Blues” suggests he understands exactly what’s going on. It’s one of the best songs on the EP, but be sure to check out the excellent “You're Just Too Happy for Me” – it’s as cocky, confident and self-assured as the real thing.
www.facebook.com/k.c.harrismusic
www.kcharrismusic.bandcamp.com
K.C. Harris CD Baby Page
Phil S.