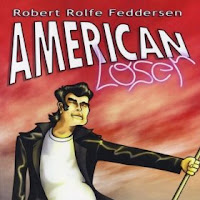 With a series of acclaimed albums under his belt and his “American Loser” video currently going viral on YouTube, Robert Rolfe Feddersen must feel like his time has come. His latest collection, also entitled “American Loser”, has been recorded by Steve Albini and features ten tracks of honest-to-goodness Americana-folk-rock, where Feddersen rails against injustice, the failure, or at least the deviation, of the American Dream, and his own inbuilt ability to mess things up.

They used to call records like this “blue collar rock”, and Springsteen was the recognized master of the genre, but Feddersen’s songs seem just as authentic and genuine, and although he doesn’t quite have the storytelling skills of the Boss, he makes up for it with great tunes, hard-hitting imagery and fire in his guts.

Opening with the title track, it’s a tale of disenchantment and disappointment, where Feddersen straddles the line between resignation and anger, and the guitar / drum accompaniment is as uncompromising as the subject matter. Albini’s method never gets in the way of the song, and it’s Feddersen’s words that hold the album together - and his candor is admirable. Tracks like “America” and “Waiting for Good Luck” feel dredged from his soul, the latter sharing the same sense of abandonment that can be found throughout the Townes van Zandt songbook.
www.robertrolfefeddersen.com
www.facebook.com/RRFeddersen
www.reverbnation.com/robertrolfefeddersen
Robert Rolfe Feddersen CD Baby Page
Phil S.