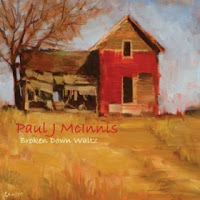 From Waterloo, Ontario, Paul J. McInnis is a singer-songwriter who fully embraces the North American folk-troubadour tradition. His style harks back to far simpler times, when a songwriter would be travelling rather than touring, earning his crust wherever an audience could be found, and today McInnis can still be found plying his craft in pubs, coffee-houses and bars, as well as on the occasional street corner.

“Broken Down Waltz” is his new record, recorded live off the floor, and featuring some of his best friends playing mandolin, harmonica, accordion, cello and guitar. The lack of studio gloss presents the music in far more authentic surroundings, and if there are mistakes, they’re hardly noticeable, and are more than made up for by the purity and spontaneity of their back-to-basics approach.

His stated influences are John Prine, Randy Newman and Bill Monroe, a trio of artists who contribute to the Americana tradition in completely different ways. McInnis takes aspects of all three and has come up with something heartwarming and uplifting, with his literate songwriting providing the backbone to everything we hear.

Standout songs come thick and fast: “Slip Away” opens the collection with a narrative about the one that got away, and sets the album up perfectly for what’s to come. “What's Done Is Done” is catchy and upbeat, reminds me a little of Uncle Tupelo, and if radio played this sort of thing, they’d be playing this. “Stories of Lily” tells its tale with some finesse and should win an award somewhere down the line, and the album’s brought to a conclusion by the outstanding title track – a country cousin to John Prine’s “Donald and Lydia”.
www.pauljmcinnis.com
www.facebook.com/Paul-J-McInnis
www.reverbnation.com/pauljmcinnis
Paul J McInnis CD Baby Page
Phil S.

Learn how to get your song on itunes at ReverbNation.com